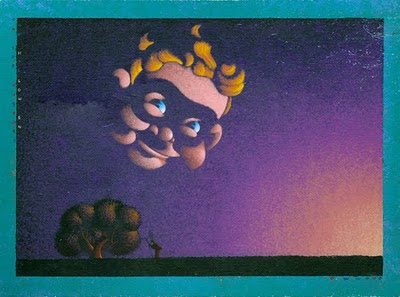 "On The History of Halloween", 16 by 22 inches, acrylic on canvas 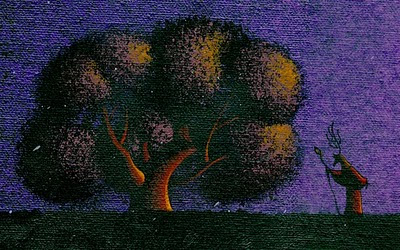 This is a piece, with a closer up detail, I made in 1988, on the subject of Halloween and its history. Some historians date the celebration back to the Romans and their Feast of Pomona, Pomona being the goddess of fruit and seeds (ironic to anyone who is familiar with the Los Angeles suburb of the same name), and, more predictably, Parentalia, the Festival of the Dead. The Celtic festival of Samhain (Old Irish for "summer's end") brings us most of the familiar trappings of the holiday (using that word loosely, since few people get off of work on October 31, although I don't know how much work gets done with all of the costumes and other goings-on in offices. It's on Sunday this year anyway.) The Celts believed the spirits of the dead could walk among us during the Samhain celebration. Wearing costumes warded off the evil spirits by having the wearer appear to be one of them. The idea of going door to door demanding "treats" comes from the Medieval practices of "souling", when poor people, of which there were many, traded prayers for the dead for food from those visited. This occurred on "Hallowmas", or All Saints Day. The night before, "All Hallow's Eve", became the shortened version "Hallowe'en". The apostrophe was dropped from the spelling sometime in the 20th Century.

I've always been curious how a ceremony honoring or fearing dead people turned into a children's party. I loved it as a kid, as I did anything having to do with the world of the imagination, the stranger the better. Now, like all things we Baby Boomers have experienced, it's as much an adult occasion as one for kids.

This painting mixed the two functions, with the mischievous little boy's masked face appearing in the sky like a vision above the vaguely Pagan figure paying homage to a tree. I wanted the boy's mask to blend into the night sky, becoming a part of the negative space. The Pagan figure (seen in the detail) wears the head, whether real or manufactured I don't know, of a deer or some sort of antlered animal atop his red robes. A feather of some kind tops his staff.

The image is surrounded by the kind of border I was incorporating into a lot of pictures at that time. The frames of artist Neil Jenney, who also uses typography, inspired it. It's one of many elements I've employed and then abandoned over the years. This particular one often received a response from viewers that it made the piece look too "poster-ish", or that supposed death knell of criticism,
"illustrative". I don't know if Neil Jenney has ever had to put up with such baloney.

On the left, partly on the border, partly on the image, reads "On the History Of Halloween". On the lower right just below the image there's an "Owwooo" to be read. Humor isn't always welcome in art, which is odd, since there's so much to been found there, whether intentional or not.

If you do any celebrating or observing of the Halloween holiday, have fun and be careful.
Posted by Ray-Mel Cornelius at 9:20 AM

Labels: From the vaults, October is a busy month, Paintings