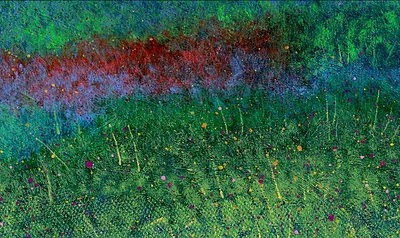 This is another detail of a larger painting. I'm now using it as the index page image on my web site.
Posted by Ray-Mel Cornelius at 11:21 AM No comments: 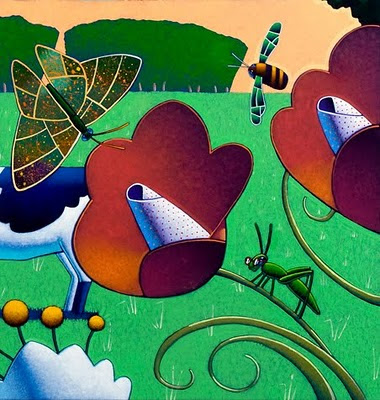 Sometimes it's interesting to isolate a small part of a larger painting, and see if it makes something new. In this case, it's the lower right corner of "Outside".
Posted by Ray-Mel Cornelius at 7:38 AM 2 comments: 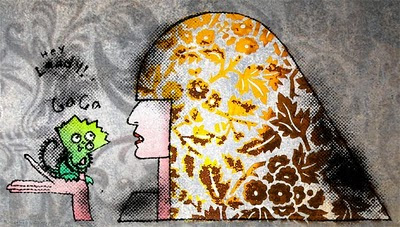 I see Lady Gaga as a combination of Madonna and David Bowie. While her music is not really my taste, a little too "pop"/dance (the latter of which I do very badly, so I don't do it at all), I do like "Bad Romance". Even that song would have probably never been heard by me but for the gym I sometimes visit, with its top 40 radio station blasting, about twenty minutes apart, that and every Ke$ha, Katy Perry, etc. sound to make the airwaves.
But my preferences aside, in interviews she makes references to her "little monsters", fans who feel outcast, uncool, nerdy, all those things which, if one is considered such, makes adolescence much more difficult than most adults realize or remember. So I have to admire her for reaching out to that demographic and giving them a feeling of acceptance.
Her stands taken in favor of gay marriage and the humane treatment of animals, while maybe not that radical or surprising, still show an interest in more than just draining cash from the pop music trough. So here's a little tribute for Lady Gaga, and another sample for the "Neo-Retro" style for me.
Posted by Ray-Mel Cornelius at 9:50 PM 4 comments: This is the third of these longhorn/wildflower paintings I've done for shipment to Monte Wade Gallery in San Antonio.
These were done with a specific market in mind, although my past experience with cattle, limited and unwelcome though it was, gives me some pedigree to work with these subjects.
Longhorns, for all their overuse, are still cool animals. And I like painting wildflowers, and the abstraction that is inherent in them. So sue me.
Posted by Ray-Mel Cornelius at 9:58 AM No comments: 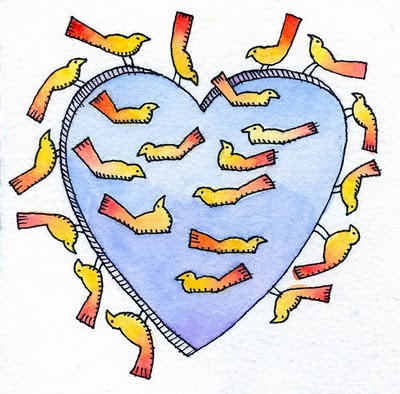 Especially to the smiling woman with whom I spent the first of what is now twenty-three years worth of dates.
I hope everybody who wants it finds who or what they want.
Posted by Ray-Mel Cornelius at 10:31 AM No comments:

It's in the mail.

A few years ago I was commissioned to create an image for a book published by the Half-Price Books chain of stores. The book was titled "Say Good-Night to Illiteracy" and featured amateur stories and poems with pictures by professional artists. It was sold at the stores with the sales proceeds going to school illiteracy programs.
The story illustrated by this image described how, as the people of Africa watched the Moon, it also watched over them. The painting was accepted into Spectrum, an annual juried show of fantasy oriented art.

A while after Spectrum was published this letter arrived in the mail. 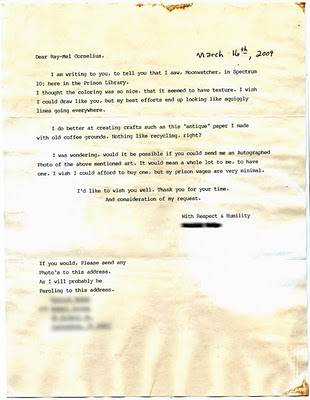 For obvious reasons, including respect for the writer's privacy, I've blurred his name and forwarding address.
The note surprised me, but I was also flattered by it. It took awhile for me to get around to following up on this, but I eventually printed and sent the image to him. I didn't hear from him again, so I don't know whether or not he received it. I hope so.
I also hope things are working out better for him, wherever he is.
Posted by Ray-Mel Cornelius at 9:27 PM No comments: 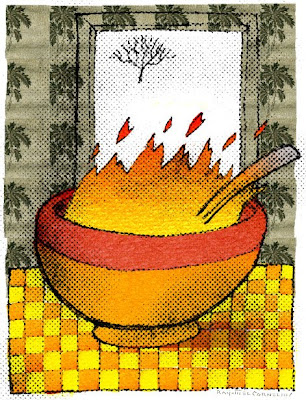 After a week of inordinately intense winter weather, and more coming soon if it all works as forecast, a flaming bowl of chili can be a consolation.
Posted by Ray-Mel Cornelius at 9:50 AM No comments: 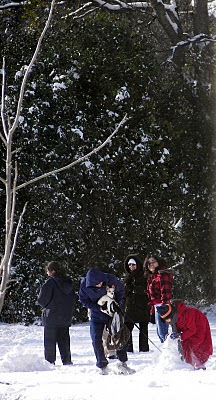 Posted by Ray-Mel Cornelius at 2:50 PM No comments: