Sometimes it's not so much a "favorite painting" as it is a favorite artist. Or at least an artist that has been a favorite. That's the case with Frank Frazetta, who died last week. This is one of my favorites of Frazetta's paintings, but hardly the only one. Like the work of Salvador Dali, my enthusiasm for Frazetta's has dampened with time. That doesn't mean I don't respect his work, though, nor does it mean I deny the impact his paintings had on my development as an artist.

As a kid I was engrossed in comic books, during the period that "fanboys" call the Silver Age. Among other things, they showed me that one could make pictures for a living. I originally thought I would only need to concentrate on pen and ink, the medium of comics (this is an example of a very juvenile brain at work at that time) so I had no interest in painting. My mom had been trying to interest me in taking oil painting lessons from a sweet, late middle-aged lady in our small hometown. I resisted for a long time, until I discovered "Creepy" and "Eerie" magazines, as well as fantasy paperbacks, with their amazing painted cover illustrations. My tiny geek mind was turned around, as I saw the need for paintings skills as well as pen and ink. I started taking the classes. I painted the usual prerequisites of floral and fruit still lifes, copies of barn-speckled landscapes and the occasional conquistador. When Ms. Prince, the teacher, decided I was sufficiently competent with those subjects I could find subject matter I wanted. And away we went.

With the images of Frazetta and Jeff Jones dancing in my head I pumped out canvas after canvas populated with monsters, werewolves, ghosts, haunted castles silhouetted against full moons, all to my teacher's and mom's mixed reactions of horror and amusement. At least it opened my fairly closed mind to other possibilities, something for which I thank Frank Frazetta.

Oh, and here's another favorite. 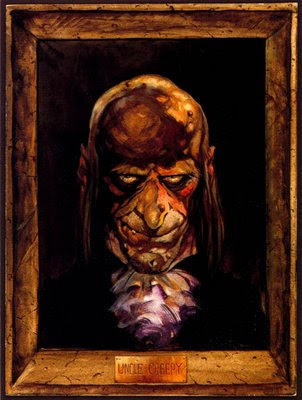 Posted by Ray-Mel Cornelius at 8:53 PM