I read today that "Iron Man" and "Iron Man 2" director Jon Favreau is directing a movie set for a summer 2011 release titled, annoyingly enough, "Cowboys and Aliens", apparently based on a graphic novel of the same name. It has nothing to do with me and of course the title is a coincidence, but I do want to get this out to the universe now. I thought of the phrase first.
Not that such wordplay is all that difficult, and seems like an obvious match when you think of it, but still. Since I work in relative obscurity, when more famous entities coincidentally come up with the same phrase, name, style, image, whatever, it appears that I'm stealing from them. I hate when this happens. 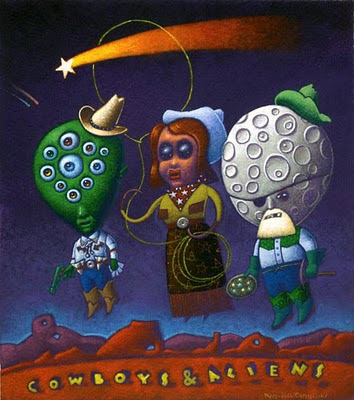 Here's the image, nevertheless, this version painted in 2008. 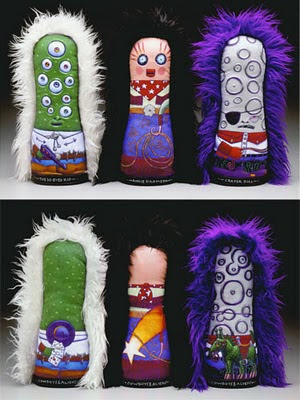 I used the same idea on these "Circus Punk" dolls created for the 2005 "Circus Punks Rule New York" exhibition at The Showroom in, yes, New York.
Posted by Ray-Mel Cornelius at 5:48 PM